The ceremony was attended by DOST Secretary Fortunato T. De La Peña and other key officials and representatives from public and private institutions, SUCs and HEIs, and other partners in development.

The opening remarks was given by NAST PHL President Academician Rhodora V. Azanza referred to the Pagtanaw 2050 as the “S&T sector’s cornerstone and contribution towards the attainment of the aspirations and goals embodied in the Constitution, and those provided by global and national frameworks such as the UN Sustainable Development Goals and AmBisyon Natin 2040.” She also introduced the vision of the Philippines as a “Prosperous, Archipelagic, Maritime Nation” by 2050, which acknowledges the country’s maritime base in building a competitive, inclusive, and sustainable society through science-based utilization of natural endowments and diplomatic assertion of our rights. 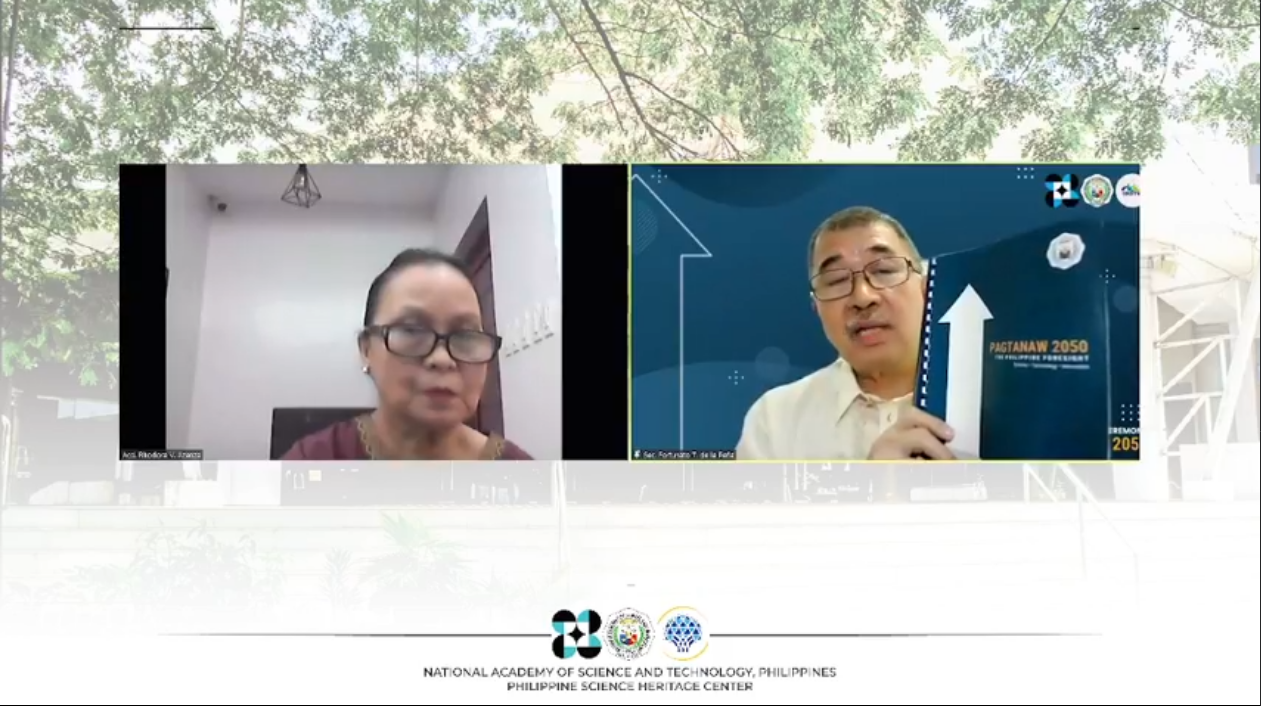 Meanwhile, Dr. Emil Q. Javier, National Scientist for Plant Breeding and Science Administration, said that this is the first time he can recall that the entire national science community came together in an inclusive participatory and systematic manner involving not only the DOST and its agencies, and the representatives from the leading universities in Manila, but also the rest of the Executive departments, the private sector, civil society, and, importantly, experts from all over the country.

For the overview of Pagtanaw 2050, Academician Padolina said that the Pagtanaw 2050 at its very essence, is a document that urges harnessing the talent and tools in science and technology to innovate towards a Prosperous, Archipelagic, Maritime Nation by 2050. The foresight is the output of the DOST initiated and funded project, “Development of a Philippine STI Foresight and 30-year Strategic Plan 2019-2050," implemented by NAST PHL from 2019 to 2021 with a budget of PHP7,431,940.00. The document contains seven (7) sections with 290,342 words (cover to cover), 31 tables, 57 figures, and 550 bibliographic references.

DOST Secretary Fortunato T. de la Peña in his response related the Foresight document with the theme of the National Science Technology Week “Agham at Teknolohiya, Tugon sa Hamon ng Panahon.” He noted that the 30-year foresight should stand the test of time as it will serve as the guiding principle that will enable the science community to assist in shaping our country into a Prosperous, Archipelagic, Maritime Nation. He focused on three main considerations after the turnover of the STI Foresight document other than reviewing and building on its specific recommendations. These included the foresight dissemination and agency buy-in. The Secretary highlighted that the STI Foresight will only materialize its full potential when all DOST units and government agencies are informed and updated on the document. He also mentioned the need to increase the capacity of DOST personnel.

Accordingly, Secretary Karl Kendrick T. Chua of the National Economic and Development Authority (NEDA) said that “...we simply cannot return to “business as usual.” To attain our 2040 vision of eradicating extreme poverty and becoming a high-income country, we need to continuously innovate and make our systems more resilient against future crises.” He also noted that the Pagtanaw 2050 can complement the National Innovation Agenda and Strategy Document, a 10-year plan to harmonize existing policies and strategies with the evolving innovation ecosystem.

Meanwhile, DOST Undersecretary for Scientific and Technical Services Dr. Renato U. Solidum, Jr. gave the closing remarks where he expressed his aspiration for the Pagtanaw 2050 to surpass the challenge of continuity and relevance in the next three decades. He also echoed DOST’s commitment of providing responsive technologies, programs, and innovative solutions for the benefit of the FIlipino people. USec. Solidum also noted that the virtual ceremony is a turning point for the DOST as it adopts futures thinking through the Foresight among its planning strategies in order to provide enabling systems that will drive scientific progress and innovation.